Quality of stickers: Very good to mint condition. Straight out of the package.

This is an issue produced by Panini and was only available at the Albert Heijn Supermarkets in the Netherlands. A complete set consists of 240 stickers and all the big names of EURO 2012 are included with action pics. You can also find stickers of former big names from the Netherlands like: Gullit, Van Basten, Bergkamp, Rijkaard…

There was also a subset issued by Panini/Albert Heijn/Coca-Cola lettered A-F. These stickers have a different size and include other players than the international Coca-Cola A-F set.

The size of these stickers (including the Coca-Cola stickers) are different than the international collection. 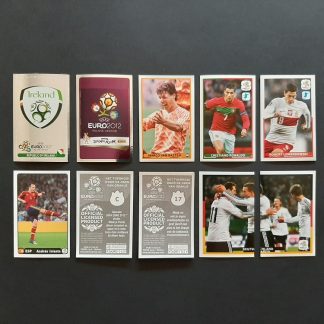