Quality of stickers: Very good to mint condition. Straight out of the package.

This is the collection of 300 stickers issued by Panini to cover the Copa America of 2007. There are two “made in Italy” versions: one with a normal frontside and a version printed on glossy paper. Besides these 2 there’s a “made in Brazil” version as well, printed as Panini usually prints them.

There are 3 different versions with small differences, all the numbers and (pics of) players are the same.

The players of Mexico (no. 123-142) have never been issued. There is a sheet with the glossy version of all of these players but it’s not released by Panini officially.

The team of Chile has been issued in another way as well. There are no stickers of single players of this team. I think this had something to do with copyright. 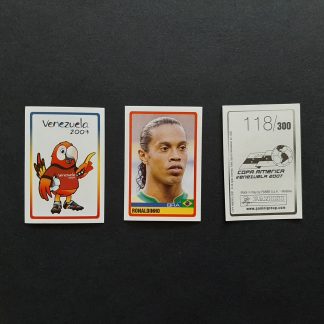