Quality of cards: Very good to mint condition. Straight out of the package.

Upper Deck issued a preview collection in 1993 and a contenders collection in 1994 about the World Cup of 1994. Besides that they issued both collections in different languages, subsets and numbers. It’s quite hard to get everything complete because of this.

The language on the backside of the cards are English & Spanish and the Fuji-logo is printed on the front. A complete Fuji-set consists of 20 cards (F1-F20). 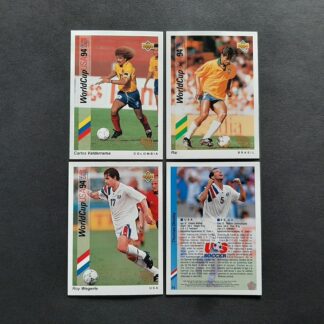